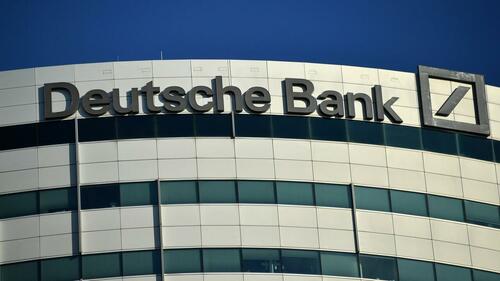 After a series of scandals – including 1MDB, fired managers who expensed strip club receipts or texted colleagues pictures of S&M sessions, and of course – the $150 million fine they paid “for significant compliance failures” in regards to Jeffrey Epstein – Deutsche Bank has now gone full Big Brother on its employees as government pressure to do so intensifies.

According to the Financial Times, Germany’s largest lender has started requiring certain bankers to download and install mobile surveillance app Movius, which allows compliance staff to monitor calls, text messages and WhatsApp conversations, according to people familiar with the matter.

Movius has partnerships with various telecoms, such as Spring, Telstra, Telefónica and Blackberry, and was used by several financial institutions during the pandemic in order to monitor employees working from home, particularly those in heavily regulated roles such as trading.

DB has been installing the software on employees’ work phones over the last several weeks, after several high-profile embarrassments involving DWS executives and WhatsApp.

A former executive of Deutsche’s asset management arm, DWS, has flagged the alleged extensive use of WhatsApp by outgoing chief executive Asoka Wöhrmann and other DWS executives in a whistleblower complaint to Germany’s financial watchdog BaFin, the Financial Times has reported.

The FT also reported this year that Deutsche chief executive Christian Sewing exchanged friendly WhatsApp messages with a German businessman who the bank had ditched as a client after a number of potentially suspicious payments. -FT

Though this isn’t the first time Deutsche Bank has made headlines for surveilling employees, the German lender joins the likes of JPMorgan Chase, UBS, Julius Baer, Jeffries and Cantor Fitzgerald in the use of Movius in recent years – and comes as banks are expanding their use of monitoring software amid government crackdowns on banks’ record-keeping practices and general compliance. Both the US Government and the UK’s Financial Conduct Authority, as well as BaFin in Germany, have demanded that banks explain how they monitor their staffs’ personal communications.

According to the Times, Deutsche was approached by BaFin earlier this year and asked to explain how staff use messaging apps. Meanwhile, Bloomberg reported that the bank was testing out a new IT solution to improve how they monitor communications.

Credit Suisse, HSBC and JPMorgan have all had …read more