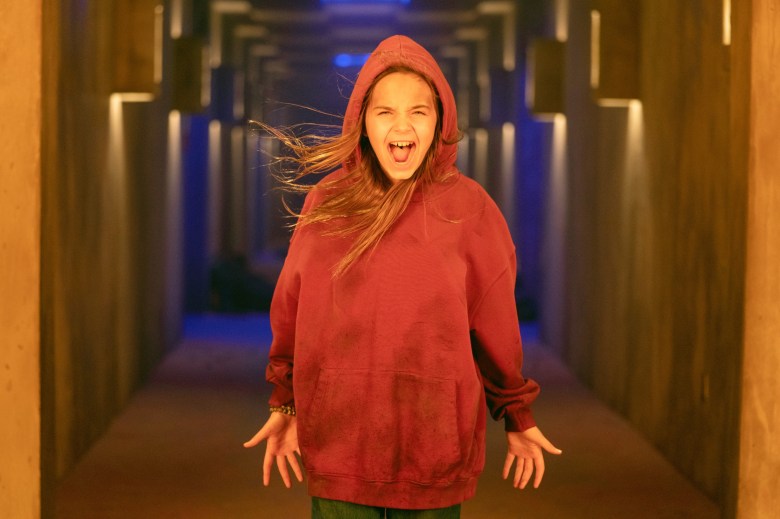 If you forced an extremely smart AI to watch 1,000 direct-to-VOD horror movies, then asked it to generate one of its own, you’d end up with something that resembles the worst Blumhouse fare from the past decade. Repeat that process 999 more times and show those movies to the same AI, and you’ll probably get “Firestarter.”

To call Universal’s take on the Stephen King novel generic would be an insult to generic cinema everywhere, as the film’s inability to make a single distinct choice is almost impressive. A Stephen King book about a kid who starts fires should be a B-movie producer’s dream. An adaptation of the pulpy novel might not be good, but one would think it would at least be entertaining.

Yet director Keith Thomas and writer Scott Teems found a way to turn the fun source material into a lethargic parenting drama that’s completely devoid of warmth. What should be an intense chase movie is essentially 90 minutes of Zac Efron and his daughter hanging out in rooms lit like a senior citizen’s kitchen before their adult kid opens the blinds.

Charlie (Ryan Kiera Armstrong) is a little girl who, as savvy literary minds could probably deduce from the title, starts a lot of fires. It began when she was a baby, engulfing her mobile in flames while she squirmed in her crib. The memory haunts her father Andy (Zac Efron, going against type as a suburban dad), who still has nightmares about the incident.

Charlie is in elementary school now, but the problem hasn’t gone away. When she gets frustrated or angry, she involuntarily causes fiery explosions. Although her mother Vicky (Sydney Lemmon) hates that term, thinking it makes her daughter sound like a terrorist. Andy and Vicky have tried to control Charlie’s condition, teaching her breathing exercises to calm herself down when she’s tempted to start a fire. But she gets older and more powerful with each passing day, and Vicky is convinced the status quo can’t be sustained.

As it turns out, both Andy and Vicky have superpowers of their own. She can move objects with her mind, and he has something called “the push” that allows him to hypnotize people with his eyes. Years ago, they were both test subjects in a top-secret government program who escaped from custody after their daughter was born. Charlie was never supposed to leave a …read more

Steve Martin Explains the History of the Whoopee Cushion on SNL