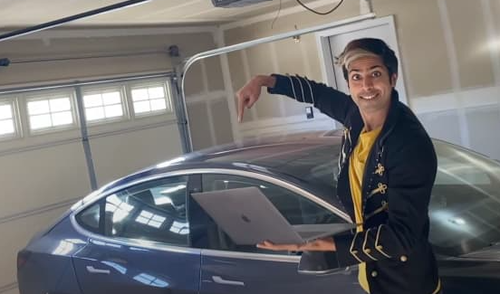 One Tesla owner is putting his vehicle to good use, telling CNBC he is running free bitcoin mining software on a computer plugged into his Tesla’s 12-volt power socket to mine up to $800 in cryptocurrency per month.

Siraj Raval has also put his 2018 Tesla Model 3 to work by wiring interconnected graphics processing units to the “frunk” of his car, which draws power from the vehicle’s battery.

When ether prices peaked in 2021, he said he was netting about $800 per month. Now that ether has fallen, he is likely making a fraction of what he made in 2021, though is still in the black.

Bitcoin miner Alejandro de la Torre told CNBC: “The main component is the price of the electricity. If it’s cheaper doing it through an electric vehicle, then so be it.”

In 2018, Chris Allessi was the first to bring up the idea of mining crypto via his Tesla. “I like electricity. I like zapping stuff, building stuff. You give me an electric motor, I give you a finished product,” he said at the time.

He tried to mine using a Bitmain Antminer S9 hooked up directly to his car battery using a power inverter. He used the vehicle’s internal software to do the mining, telling CNBC: “It was no big deal. I could run the mining program within the browser.”

“It’s a computer with wheels…It’s so simple to hack into this computer car,” Raval added. Tesla hacker and crypto miner Thomas Sohmers disagrees that hacking the car’s firmware is even necessary: “The car is already built to deliver over 100 kilowatts, and anything connecting to the car is going to be a fraction of that. There’s no need to do what [Raval] says he’s doing. It doesn’t make technical sense.”

Whit Gibbs, CEO and founder of Compass, added: “The mechanisms are all there. You have a power source, you have space, you have the ability to add cooling. There’s certainly enough power provided by the battery to fire up an ASIC and run it.”

Alessi ultimately questions whether using your Tesla to mine crypto is even worth it, however.

“Why would you want to put that kind of wear and tear on a $40,000 to $100,000 car? And right now, even though the price for bitcoin has gone up dramatically, so has the difficulty level…In the …read more