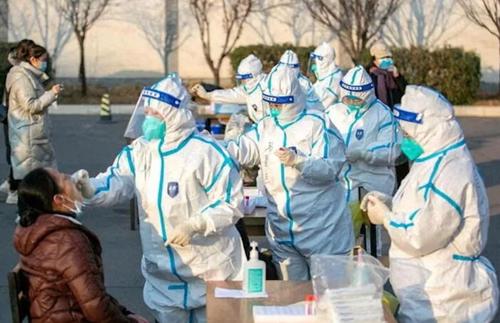 China is now dealing with three serious outbreaks as the eastern port city of Ningbo reported 16 cases over the weekend, while the city of Yuzhou, a smaller city with 1.3M residents, has seen some of its neighborhoods placed on lockdown.

Fortunately for China’s economy, the Ningbo Zhoushan Port, the largest port in the world, said in a statement published on Weibo late Sunday that its operations are basically stable despite the strict COVID controls to try and contain the outbreak. Of the 16 cases, authorities said nine were imported and seven were local.

According to a statement posted by Yuzhou’s city government to its Weibo account, a lockdown has been imposed upon the downtown district, even though the city reported just 3 cases on Monday. Public transit, taxis and school have all been suspended in the district.

Fortunately for the Chinese economy, the numbers in Ningbo are much smaller than the number of new cases still being reported in Xi’an, which is in the middle of a mass lockdown, leaving many in the city of 13M without easy access to essentials like food and medicine.

As the virus continues to spread, the Ningbo Containerized Freight Index has just reached an all-time record high of $4,264/FEU at a time when shipping costs around the world have surged.

The port city has already undergone 3 partial lockdowns in the past 6 months, according to China’s state-controlled press. Meanwhile, some 200 pilots have been put into quarantine over the past week after two pilots tested positive for the virus.

It’s fair to assume the world is curious about the conditions inside Xi’an, as critics of China pointed out on Twitter that there are no “citizen journalists” in Xi’an reporting on the latest lockdown. That’s unlike the situation in Wuhan, which was covered by several citizen journalists. However, most of these people were disappeared or otherwise disciplined by Chinese authorities, setting a pretty clear example for anybody else who might want to try it.

Still, even China’s state-controlled press has acknowledged that people in the city had been struggling to buy food. It’s unclear whether this situation has eased.

Beijing must contain the situation in Ningbo: freezing the port would have broad-based ramifications for the entire Chinese economy, and the global economy more broadly.