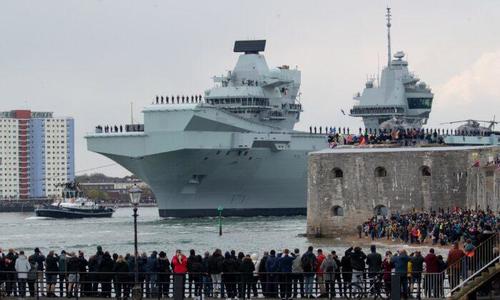 Authored by Alexander Zhang via The Epoch Times,

Britain’s armed forces will trial laser and radio frequency weapons as part of a “Novel Weapons Programme,” the Ministry of Defence (MOD) said on Tuesday.

The MOD said it had awarded three contracts worth around £72.5 million ($100 million) to UK industry to produce advanced laser and radio frequency demonstrators as part of its “Novel Weapons Programme.”

A £72.5m investment in the advancement of Directed Energy Weapons, producing laser and radio frequency weapons, will be tested by the @RoyalNavy and @BritishArmy.

These new weapons will be integrated onto existing platforms for the Royal Navy and British Army and will undergo user experimentation from 2023 to 2025, the ministry said.

The first laser device will be fitted onto a Royal Navy Type 23 frigate to detect, track, engage, and counter Unmanned Aerial Vehicles (UAV).

A laser demonstrator will be trialled on the British Army’s Wolfhound armoured vehicle to test its capability against UAV and other aerial threats.

The British Army will also test a radio frequency demonstrator on its MAN SV truck, to detect and track a variety of air, land, and sea targets.

According to the MOD, these “Directed Energy Weapons,” which are powered by electricity and operate without ammunition, will significantly reduce operating costs, increase platform endurance, and provide “unprecedented offensive and defensive flexibility to personnel on the front line.”

China Syndrome? Is Evergrande A Symptom Of Deeper Malaise

“These technologies have the potential to revolutionise the future battlefield for our armed forces, enabling the prosecution of new targets in the land, sea, and air domains, and allowing commanders to meet mission objectives in new ways,” said Shimon Fhima, the MOD’s director of strategic programmes.

Minister for Defence Procurement Jeremy Quin said the new weapons “are a key element of our future equipment programmes and we intend to become a world-leader in the research, manufacture, and implementation of this next-generation technology.”

Fhima said the MOD is determined to “exploit at pace the cutting-edge technologies developed by the talented scientists and engineers across the UK to capitalise on its benefit.”