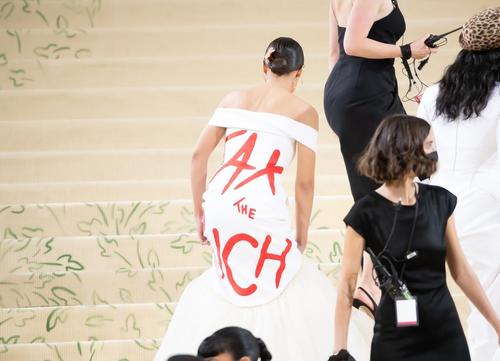 The Masking Of The Servant Class: Ugly COVID Images From The Met Gala Are Now Commonplace

Authored by Glenn Greenwld via greenwald.substack.com,

From the start of the pandemic, political elites have been repeatedly caught exempting themselves from the restrictive rules they impose on the lives of those over whom they rule. Governors, mayors, ministers and Speakers of the House have been filmed violating their own COVID protocols in order to dine with their closest lobbyist-friends, enjoy a coddled hair styling in chic salons, or unwind after signing new lockdown and quarantine orders by sneaking away for a weekend getaway with the family. The trend became so widespread that ABC News gathered all the examples under the headline “Elected officials slammed for hypocrisy for not following own COVID-19 advice,” while Business Insider in May updated the reporting with this: “14 prominent Democrats stand accused of hypocrisy for ignoring COVID-19 restrictions they’re urging their constituents to obey.”

Most of those transgressions were too flagrant to ignore and thus produced some degree of scandal and resentment for the political officials granting themselves such license. Dominant liberal culture is, if nothing else, fiercely rule-abiding: they get very upset when they see anyone defying decrees from authorities, even if the rule-breaker is the official who promulgated the directives for everyone else. Photos released last November of California Governor Gavin Newsom giggling maskless as he sat with other maskless state health officials celebrating the birthday of a powerful lobbyist — just one month after he told the public to “to keep your mask on in between bites” and while severe state-imposed restrictions were in place regarding leaving one’s home — caused a drop in popularity and helped fueled a recall initiative against him. Newsom and these other officials broke their own rules, and even among liberals who venerate their leaders as celebrities, rule-breaking is frowned upon.

'Nasser Was Not An Outlier' - Exposing The FBI's Incurable Rot

But as is so often the case, the most disturbing aspects of elite behavior are found not in what they have prohibited but rather in what they have decided is permissible. When it comes to mask mandates, it is now commonplace to see two distinct classes of people: those who remain maskless as they are served, and those they employ as their servants who must …read more

Seven Possible Causes Of The Next Financial Crisis