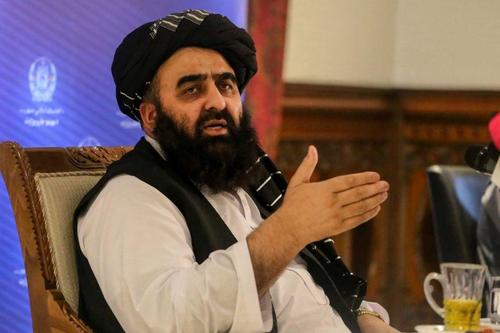 Taliban Urges US To Show “Heart” After Raking In $1.2 Billion At UN Donor Conference

The Taliban is urging the United States to have a “heart” and step up and pledge humanitarian aid to Afghanistan, as well as unfreeze sanctioned assets. The provocative and deeply ironic statements (after a 20-year occupation which Washington ostensibly framed as “helping” the Afghan people) came after a donor conference in Geneva on Monday resulted in $1.2 billion in aid pledged.

The United Nations hosted the international donor conference, with an initial aim to reach over $600 million, but by the days’ end UN Secretary General Antonio Guterres unveiled pledges totaling more than a billion dollars. “This conference has fully met my expectations in relation to the solidarity with the people in Afghanistan,” Guterres said.

Subsequently on Tuesday the Taliban thanked the UN donor conference for the better than expected response, but singled out the United States – asking it to show “heart” at a moment of continued economic collapse after years of war and the rapid US withdrawal.

“America is a big country – they need to have a big heart,” the Taliban’s acting foreign minister Amir Khan Muttaqi said as part of the statements.

He claimed the Taliban would spend all donor money “wisely” and with transparency in order to alleviate crushing poverty in the country, as APF relates:

Amir Khan Muttaqi, the regime’s acting foreign minister, told a press conference the Taliban would spend donor money wisely and use it to alleviate poverty.

“We thank and welcome the world’s pledge for about one billion dollars in aid and ask them to continue their assistance to Afghanistan,” Muttaqi said.

“The Islamic Emirate will try its best to deliver this aid to the needy people in a completely transparent manner.” He also asked Washington to show appreciation for the Taliban allowing the US military to complete its troop withdrawal and evacuation of more than 120,000 people last month.

Previously the Biden administration said it could restore humanitarian assistance and foreign aid to Afghanistan based on its “actions” – particularly allowing Americans and Afghans who assisted the US to leave the country, and based on if it demonstrates a good track record in combatting terrorism.

Taliban says America needs to have a “big heart.” https://t.co/Wx0YKNiQ7D

Since the August Taliban takeover of Kabul, the US has frozen all cash held in its …read more

Gazing Into The Freedom Pool