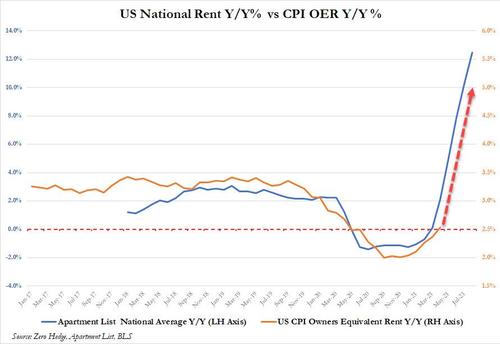 Rabobank: Milley’s Presence Is Massively Damaging Image-Wise For The US

By Michael Every of Rabobank

Today’s headline – “OER misses” – speaks to the key US CPI report yesterday, where the meme is suddenly that inflation pressures are past their peak because: 1) used car prices went down; 2) air travel prices went down; and 3) rent *officially* went up only a little as measured by the statistical construct that is Owners’ Equivalent Rent (OER) – which bears no relationship to actual rents being paid by people in the real economy. In short, a little statistical jazz-hands and we ‘transitory inflation!’,…despite the fact there are shortages wherever you look in US supply chains. You know where else used to have low reported inflation, but no goods on the shelves? It started with US and ended SR.

“OER misses” can also be read by middle-aged British readers as the risqué catchphrase “Ooh err, missus” of the late comedian Frankie Howerd. Besides Frankie overlapping with the USSR, and looking like Brezhnev as he aged, there is a need for that double-entendre today in terms of the broader context in which markets are operating.

Yesterday’s US Met Gala, which I would have loved to see Frankie comment on, was a po-faced-seriousness surreal dreamscape akin with costumes akin to ‘The Fifth Element’ –when do we get a celebrity called “Leeloo Multipass”?– without the comedic irony. Except in that the event was held during a pandemic, days after the 20th anniversary of 9/11, and the US defeat in Afghanistan, which is seeing intellectual angst about the decline or end of US global power –on which our global market architecture is built– in the US intellectual circles who don’t now cheer that end. (And as it now emerges Friday’s bilateral call saw Xi Jinping reject a proposed summit with President Biden.) The Gala’s unmasked, becostumed attendees, served by helpers wearing masks, displayed domestic and international political disconnect even larger than the inflation rents-OER gap. Deliberately political it was too, with AOC wearing a presumably-expensive “tax the rich” dress at a $50,000 a head soirée, just as Democrats consider rolling back the SALT tax provision “for two years” which caps federal tax deductions at $10,000 and sees mainly the rich in New York and California (i.e., Met Gala attendees) pay more tax. In short, …read more