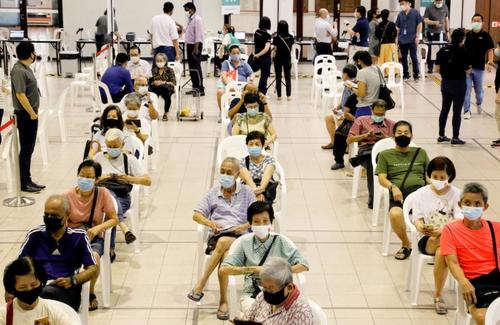 Singapore has just reached a level of vaccination penetration that many other developed economies would envy: 80% of its adult population has been vaccinated. And yet, it continues to struggle with one of the worst outbreaks yet. On Sunday, the nation of 5.7 million people reported 555 new local COVID-19 cases, the most since August 2020. One day prior, Singapore recorded its 58th COVID death, a partially vaccinated 80-year-old man with a history of diabetes, hypertension and heart problems.

Rather than lowering restrictions, Singapore’s Ministry of Health last week banned social gatherings at workplaces, allegedly because clusters of workers gossiping around the water cooler led to an outbreak. And in their free time, Singaporeans have been asked to attend one social gathering per day, tops.

A curious thing has happened since Singapore hit 80%, Cook reminds us: “The community cases have actually gone up since reaching 80 per cent coverage, in part because we’re allowing more social events for those who are vaccinated and, I dare say, more fatigue at the control measures,” Cook told the ABC.

And the outlook isn’t exactly positive: Gan Kim Yong, co-chair of the multi-ministry task force, said the “worrying” spike in infections would “probably get to 2,000 new cases a day,” describing the next two to four weeks as “crucial.”

It’s a lesson that’s not unique to Singapore; “One main lesson from across South-East Asia is that it is incredibly hard to prevent Delta’s spread and, as Singapore shows, even high vaccination rates will not help that much,” Cook added.

While they’re mostly symptomatic, Singapore is still finding a lot of breakthrough infections among the vaccinated. At this point, it’s only the latest piece of evidence to suggest that even the revised official efficacy rate of the Pfizer jab just isn’t realistic when we look at the case numbers.

“Russiagate In A Nutshell”: Glenn Greenwald Breaks Down Significance Of Expected Indictment Against Hillary Clinton Lawyer