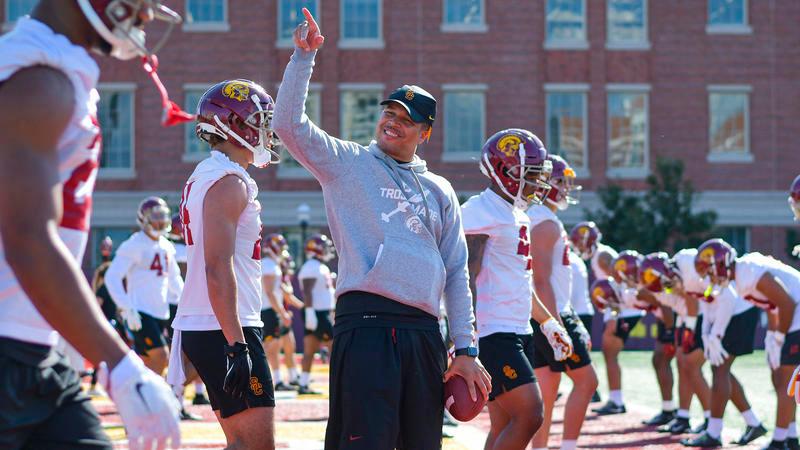 LOS ANGELES — Donte Williams walked around the practice field on Tuesday, a printed plan in the hands behind his back. Some things remained the same, like the cleats he wears to go through drills with his cornerbacks. But he didn’t spend as much time with the group as usual, instead wandering around and surveying other aspects of the USC football team.

That’s the new life for the Trojans’ interim head coach, promoted from associate on Monday following the news that Clay Helton had been fired two games into the 2021 season.

“To be honest, it felt great,” Williams said in a press conference following the practice, though he noted some oddities. “I was always rooting for my guys – that’s the way it should be, it’s competitive. Now to come out here and cheer on the offense when they make a big-time play, that’s a little different.”

Everything has been a little different for USC the past two days, with Helton not on the practice field for the first time in more than a decade. Helton was the coach who recruited all the players to USC, who sold them on his vision for the program.

So the players are still processing the sudden change in leadership as they try to move on to the remaining 10 games on the schedule.

“We wanted him to be the next Pete Carroll. We wanted to lift him up and be great,” captain Isaiah Pola-Mao said Tuesday. “Of course, things don’t go our way, stuff happens in this business, but he’s always with us. He’s always part of this family.”

The moving on part is where Williams will need to guide the team most this week.

Williams came to USC prior to the 2020 season from Oregon, renowned for his recruiting acumen and ability to develop defensive backs. After a year as a position coach, he added associate head coach to his title prior to this year.

But the 39-year-old from Los Angeles admits there’s a learning curve as he takes on the interim job.

“I’d be lying to you saying I know everything,” Williams said. “I pretty much want to know exactly what the offense is doing from a verbiage standpoint. It’s one thing to play against our offense, it’s another thing to truly know their verbiage.”

He spent a lot of time observing that side of the ball during scout team work on Tuesday. And he understands he’ll have to …read more

Selmon brothers to be remembered with statue at Oklahoma

Dutch to spend billions on climate subsidies amid economic boom