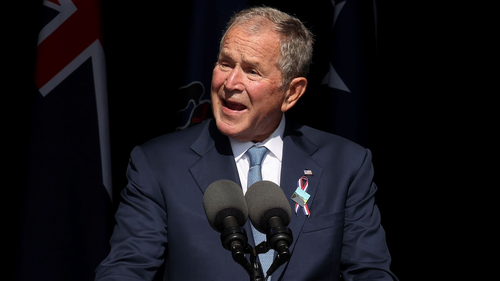 Buchanan: Who And What Is Tearing The US Apart?

In Shanksville, Pennsylvania, on Saturday, former President George W. Bush’s theme was national unity — and how it has been lost over these past 20 years.

“In the weeks and months following the 9/11 attacks,” said Bush, “I was proud to lead an amazing, resilient, united people. When it comes to the unity of America, those days seem distant from our own. A malign force seems at work in our common life that turns every disagreement into an argument, and every argument into a clash of cultures.”

Though he surely did not realize it, Bush had himself, moments before, given us an example of how that unity was destroyed when he drew a parallel between the terrorists of 9/11 and the Trump protesters of Jan 6. Said Bush:

What is Bush saying here?

That Ashli Babbitt, the Air Force veteran shot to death trying to enter the House chamber on Jan. 6, and Mohamed Atta, who drove an airliner into the North Tower of the World Trade Center in a massacre of close to 3,000 people, are “children of the same foul spirit.”

Query: Was not Bush himself here giving us an example of the “malign force” that “turns every disagreement … into a clash of cultures”?

Bush did not mention his own contribution to our national divide: his invasion of a country, Iraq, that did not threaten us, did not attack us, and did not want war with us — to disarm it of weapons it did not even have.

Which contributed more to the loss of America’s national unity?

“In those fateful hours” after 9/11, said Bush, “Many Americans struggled to understand why an enemy would hate us with such zeal.”

Yet, well before 9/11, Osama bin Laden, in his declaration of war on us, listed his grievances. Our sanctions were starving the children of Iraq. Our military presence on the sacred soil of Saudi Arabia, home to …read more