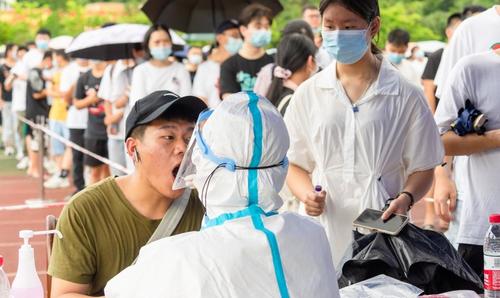 Weeks have passed since China finally managed to suppress the broad-based delta-driven COVID outbreak centered around Nanjiang which prompted lockdowns, restrictions on movement and mass testing after the virus spread to nearly two dozen provinces.

But unsurprisingly (since COVID is now endemic to the global human population), a new outbreak has already flared up in Putian, a city of roughly 3MM people in the East Chinese province of Fujian. There’s one interesting detail that sets this outbreak apart from earlier ones: the outbreak has centered around a school, with dozens of school-age children number among the 90 cases that have been confirmed in recent days.

Since September 10, the infections linked to Putian’s epidemic outbreak have soared to 96 in just three days: 79 in Putian, 10 in Xiamen and seven in Quanzhou. The outbreak, which has been deemed “locally transmitted” despite the alleged link to Singapore. Around 20 of these cases have involved children younger than 12.

Because of this, Chinese health experts quoted in the Global Times, a Chinese state-run newspaper, warned that this latest outbreak is unlikely to be tamed by the upcoming Autumn Festival, but should be stamped out before the National Day holidays (which take place in October).

Chinese authorities claimed to have identified the recent traveler as the source of the outbreaks, although the authorities claimed that this patient didn’t test positive until after the quarantine period. The outbreak is said to have two “chains” of transmission: one related to Putou Primary School and one to the Xiesheng shoe factory. The total infections from the school increased to at least 15, along with 10 other infections from the factory. Xianyou county where the school and shoe factory are located started county-wide testing on Monday, testing more than 900,000 people.

What’s more, the city has since asked residents to stay in the city and all schools and kindergartens, excluding grade three senior high students and boarding schools, were asked to go to online classes starting Monday.

Although fewer vehicles were seen in the city’s streets on Monday, the city isn’t on lockdown, according to the GT.

The local health authority has confirmed that the infections were caused by the delta variant. The NHC has warned that there’s still a risk this outbreak could spread to other provinces, and has advised the entire country to …read more

COVID Hysteria Could Destroy A Generation