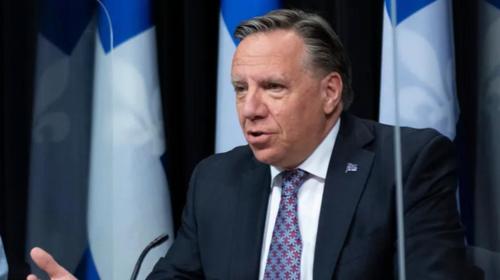 The province of Quebec has become the latest local government (and the first in Canada) to decree that all nurses working in the province will need to get vaccinated by Oct. 15, or they will be suspended without pay, according to the province’s health minister, Christian Dubé, who made the announcement on Tuesday.

The decision isn’t exactly a surprise. Dubé and Quebec Premier François Legault have said in recent weeks that they intended to make vaccination mandatory for health-care workers, but they didn’t specify a deadline or consequences for workers who didn’t follow the mandate until Tuesday, when Dubé made the announcement during a provincial update.

For weeks, such events have been led by Dubé, accompanied by Public Health Director Dr. Horacio Arruda. But given the gravity of the announcement, Legault returned to lead the news conference himself for the first time in weeks.

Legault noted the number of hospitalizations in the province had climbed to 171 from 55 a month ago. And when asked which workers will be affected by the mandate, Dubé responded: “Everybody … 100 per cent of employees.”

Vaccine passports will also be required for visitors to hospitals, he added.

It’s not just nurses who will be affected: doctors, midwives, professionals in private clinics and volunteers will all need to be vaccinated before entering a hospital.

Hospital Staff That Decline COVID Vaccine For Religious Reasons Must Attest To Also Swearing Off Tylenol, Tums, & Other Common Meds

One strategy is they are trying to convince people who have left the profession to return.

Others criticized the policy, saying they’re not sure it’s the right call.

Jeff Begley, head of the federation of health and social services union, said he wasn’t surprised by the government’s announcement, but he wasn’t sure they had made the best decision.

“We’re not sure that it’s the best means going forward,” he said.

Begley explained that most hospitals have eliminated their “hot” sections for COVID patients (since most people are vaccinated now). Begley believes this may have been a mistake, and that COVID patients must be …read more

Germany Is Just A Distraction From The Real Story