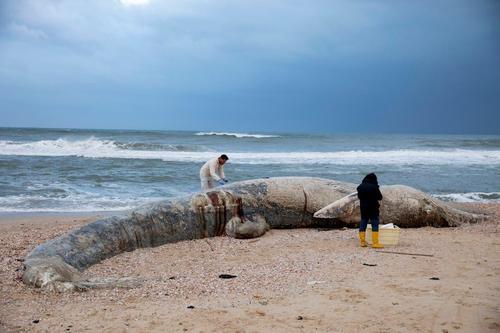 Israeli authorities have closed down miles of beaches as the county is in the midst of its “most serious ecological disaster in recent years” after an oil spill from an unknown origin occurred some dozens of miles off the coast into the Mediterranean Sea.

The Ministry of Environmental Protection indicated that tar was “washing up and contaminating the beaches” starting last Wednesday. A major clean-up and conservation effort is underway that has included the Israeli Army.

It’s believed the oil spill may have happened a week or more ago, or possibly even weeks prior, but recent stormy weather washed it up to shore.

Currently an estimated 106 miles of coastline have been impacted, stretching from Israel through the Gaza Strip. It’s also been widely reported as impacting southern Lebanon’s coastline.

A statement from the Israel Nature and Parks Authority predicted that clean-up efforts could take years after the dozens of tons of tar washed up in various places. “The disaster we are witnessing in recent days on the beaches of Israel is the most serious ecological disaster in recent years, and its consequences we will see more years ahead,” the Parks Authority wrote Saturday.

Israeli as well as various international bodies are investigating the source of the Mediterranean spillage, which has included reviewing satellite tracking data of tankers that have traversed the area in recent weeks. Interestingly and suspiciously, the investigations findings are being kept under tight wrap, as Fox News describes:

In an unusual move, an Israeli judge has issued a gag order on the investigations and any detail relating to it, including the suspects’ name or identities, the vessels involved, and destination and port of departure.

Maya Jacobs, CEO of Zalul, an Israel NGO that protects the country’s seas and streams, called to remove the gag order, and conduct a transparent investigation.

“The companies who cause the environmental risks like the petroleum and shipping companies have a great influence on the Israeli government,” she said.

Sea turtles, other marine life, and birds have been found dead in the hundreds as a result of the disaster, which has further included thousands of volunteers rushing to save injured wildlife from the large tar globs.

Israel is trying to find the ship …read more

Mysterious $111 Billion Payment Gap Is “Talk Of The Town”

The Decline Of The West: American Education Surrenders To “Equity”