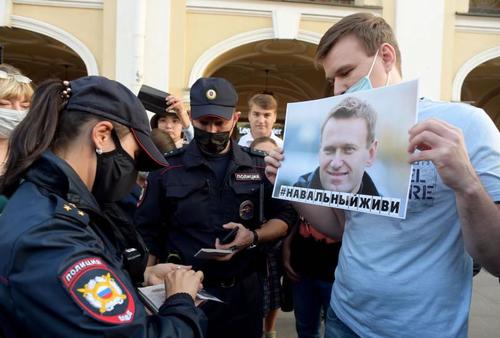 Early this month cities across Russia were hit by large, well organized and closely reported mass demonstrations in support of jailed Kremlin critic and anti-Putin activist Alexei Navalny. Over recent weekends, however, both the rallies and international media interest in them appear to have lost momentum and waned.

But not wanting to let a political opportunity to punish Russia go to waste, the Biden administration is said to be preparing major economic penalties over Navalny’s 2.5+ year jail sentence recently handed down by a Moscow court for probation violation. The US is also poised to slap penalties on the Russian government over allegations that intelligence poisoned Navalny with nerve agent back in August, which kicked off the whole saga, bringing his name from relative obscurity into the international mainstream.

A new report in Politico says the Biden White House “is expected to coordinate a sanctions rollout with European allies in the coming weeks, according to people familiar with the matter.”

One senior admin official was cited as saying while not offering specifics, “Suffice it to say… we won’t stand by idly in the face of these human rights abuses.”

Currently all “options” for sanctioning Russia are under review, which can include the following:

The package proposed three types of sanctions: Magnitsky Act sanctions on the individuals who detained Navalny; sanctions under the Chemical and Biological Weapons Control and Warfare Elimination Act of 1991 (CBW Act); and sanctions under Executive Order 13382 — which is “aimed at freezing the assets of proliferators of weapons of mass destruction and their supporters,” according to the State Department.

The scant foreign policy statements issued by President Biden thus far have focused heavily on Russia. He’s unleashed a hail of criticism on everything ranging from election ‘interference’ to the Navalny affair to bullying Ukraine and even the “bounties to kill Americans in Afghanistan” narrative.

The US review and impending rollout of new sanctions comes after on Monday the EU announced punitive measures on four Russian officials in response to Navalny’s prison sentence. The four are said to be close to President Putin and were involved in decision-making related to the Navalny saga, which has further sunk Russia-Europe relations to their lowest point in the last few years, particularly since the Ukraine and Crimea crisis.

Betting The Farm On Moonshots

“Begging The Fed For Guidance”: BofA Expects The Fed To Address Markets “As Soon As This Week”