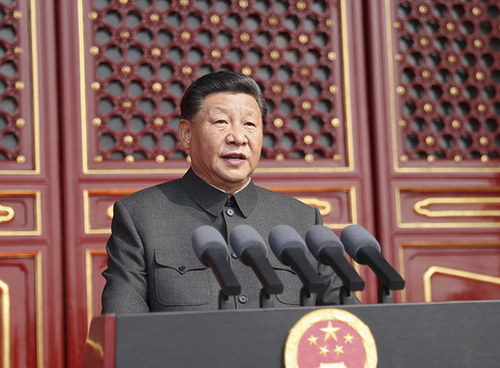 While the political gridlock and alarmist headlines out of Capitol Hill as well as a dramatic Democratic move to impeach look to define Trump’s final week in office, Bloomberg notes that China’s President Xi Jinping is sounding “unusually upbeat”.

According to the publication he issued an unusually upbeat assessment about China’s future, noting that “time and the situation” were on the country’s side in a new year marked by domestic turmoil in the U.S.

The purpose of the speech before a top-level meeting of government officials in Beijing on Monday was to lay out the Communist Party vision over the next three decades, which included the presence of the Politburo Standing Committee, Beijing’s highest decision-making body.

“The world is in a turbulent time that is unprecedented in the past century,” Xi said, striking a tone which many pundits observed stood in contrast to recent more dire sounding warnings. “But time and momentum are on our side. This is where we show our conviction and resilience, as well as our determination and confidence.”

And further according to the Monday remarks in the closed-door meeting:

“At the same time, we must see clearly that, for now and until this upcoming period of time, while our country is at an important period of strategic opportunity for development, there will always be changes to our opportunities and challenges,” Xi was quoted as saying.

“The extensiveness of these opportunities and challenges is unprecedented but, all in all, the opportunities we face outweigh our challenges,” he added, calling for unity, diligence and flexibility to achieve the party’s goals.

The cautious optimism continued, as South China Morning Post writes, while he made vague or remote references to both the pandemic and political turmoil and uncertainty afflicting the United States:

“Only by being self-reliant and developing the domestic market and smoothing out internal circulation can we achieve vibrant growth and development, regardless of the hostility in the outside world,” Xi said.

Elsewhere in the speech he continued urged that self-reliance would in part come through rapid technological innovation in order to build and maintain a “super-sized domestic market” to boost consumption.

You Can Now Buy A Tiny Bulletproof Home For The Apocalypse