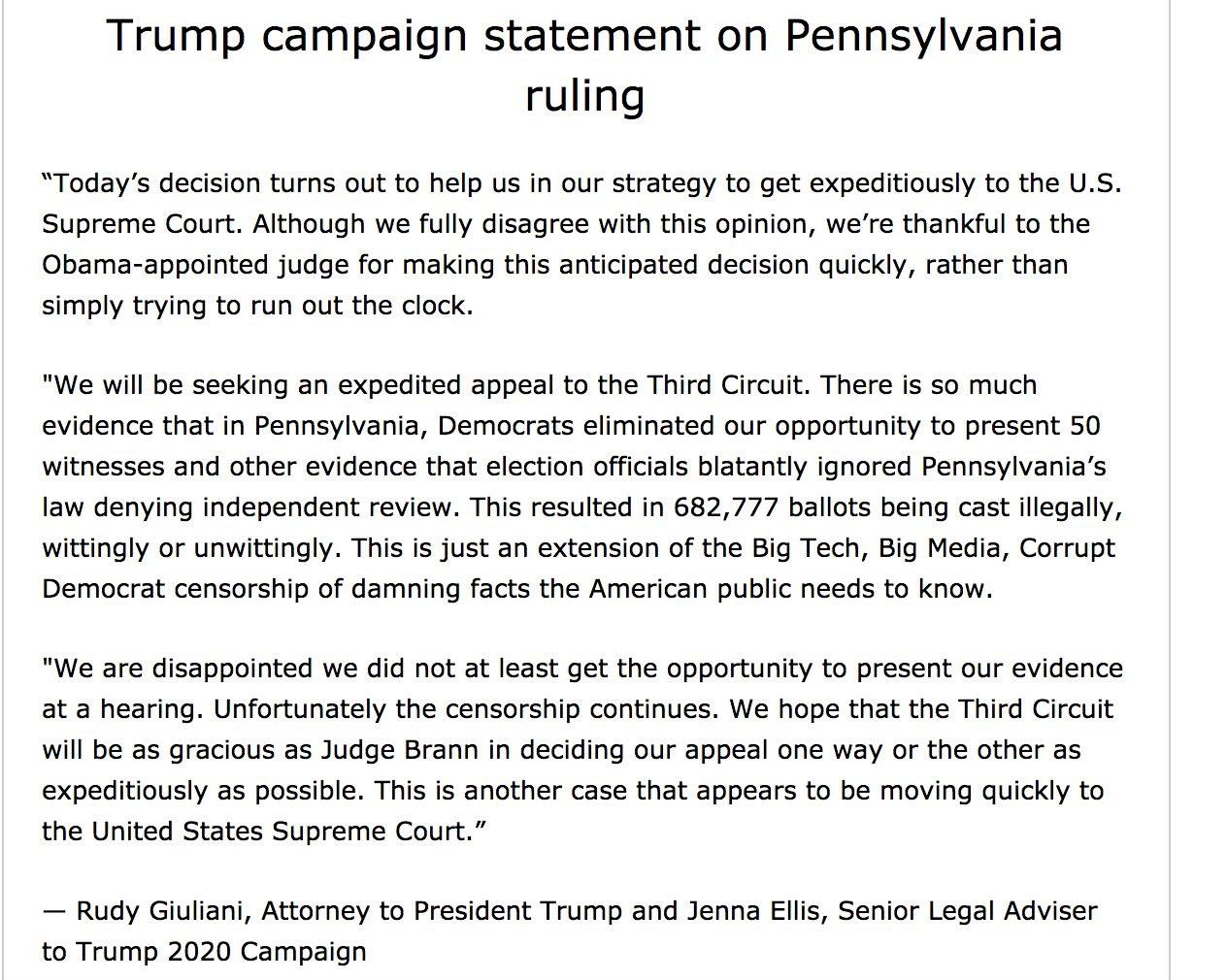 A federal judge on Saturday dismissed the Trump campaign’s lawsuit in Pennsylvania seeking to invalidate millions of votes, rejecting the “startling” request due to a lack of evidence and ruling that the state can move forward with certifying its election results. U.S. Middle District Judge Matthew Brann, an Obama appointee, ruled that the campaign presented “strained legal arguments without merit and speculative accusations” that were “unsupported by evidence.”

The ruling is a major blow to the Trump campaign’s efforts to overturn election results, with Biden leading Trump by more than 81,000 votes in Pennsylvania.

“In the United States of America, this cannot justify the disenfranchisement of a single voter, let alone all the voters of its sixth most populated state. Our people, laws, and institutions demand more,” the judge wrote.

THE KEY LINE: “In the United States of America, this cannot justify the disenfranchisement of a single voter, let alone all the voters of its sixth most populated state. Our people, laws, and institutions demand more.”https://t.co/DetGohz5wE

Trump’s personal attorney Rudy Giuliani personally argued against the state’s motion to dismiss before Brann on Tuesday, arguing that the commonwealth should not certify its results and making claims of a vast Democratic conspiracy to steal the election. In reaching his conclusion, Brann said the campaign was not “formidably armed with compelling legal arguments and factual proof of rampant corruption” needed to win such a case.

Why Morgan Stanley Expects A Correction: "Market Pressure Is Necessary To Get Congress Or Fed To Act"

BREAKING: Judge in Pennsylvania tosses Trump campaign lawsuit, says they have presented no compelling evidence of fraud or mismanagement. pic.twitter.com/kKUdstPImx

“This court has been presented with strained legal arguments without merit and speculative accusations, unpled in the operative complaint and unsupported by evidence,” the judge wrote.

The suit’s core claim was that certain Democratic-led counties had more lenient rules in accepting “defective” ballots or letting voters “cure” such ballots than Republican-led ones, which the campaign claimed violated the Constitution’s due process and equal protection guarantees. The state denied those claims and also said the campaign’s proposed remedy of disenfranchising tens of thousands of voters was implausible.