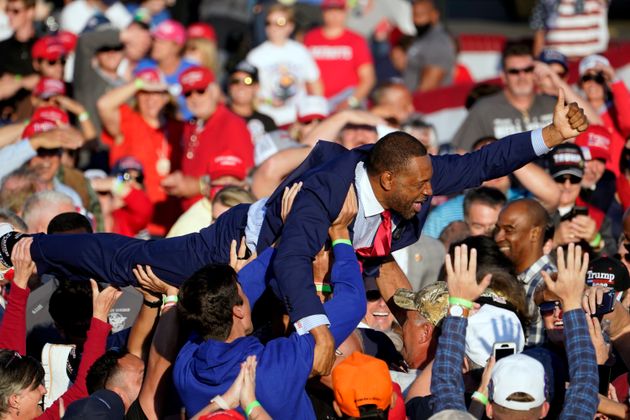 Georgia state representative Vernon Jones showed scant regard for coronavirus safety measures on Friday when he crowd-surfed over maskless Donald Trump supporters during the president’s crowded campaign rally in Macon.

Jones, a Democrat who has endorsed Trump in the 2020 election, also did not wear a mask, ignoring guidelines from the Centres for Disease Control and Prevention — which also advise only small gatherings and social distancing.

Jones faced backlash for the stunt on Twitter, where critics pointed out how the United States currently appears to be experiencing another peak of daily infections. Others criticised Trump for holding the rally (and others in recent days) in the middle of the pandemic.

Covid-19 has now killed almost 220,000 Americans and sickened upwards of 8 million more, including the president, who was hospitalised for three days in early October.

But Jones remained defiant, boasting in one tweet that “this #trumptrain is about to steam roll” over Democratic presidential nominee Joe Biden.

Surfing with @realDonaldTrump#deplorables and #PeacefulProtesters in Macon, GA. Put Georgia in the win column. We were seven thousand plus strong. This #trumptrain is about to steam roll over corrupt @JoeBiden, #fakeliberalnews, and the @DNC#FeelTheVern! pic.twitter.com/tNx87wfEEI

In another post, he wrote: “Yes, I surfed that crowd! To the haters – stay mad! You’ll be even more mad come November 3rd!”

Yes, I surfed that crowd!

To the haters – stay mad! You’ll be even more mad come November 3rd!

An article published by the Savannah Morning News in 2008 said Jones described himself as “an independent thinker and a conservative Democrat who supports faith-based initiatives, tough immigration laws and fiscal responsibility.” He voted twice for George W. Bush, the story noted.

As a Democratic politician, Jones announced his support for Trump earlier this year and even stumped for the president at the Republican National Convention in August. In his convention address, Jones accused fellow Democrats of not wanting “Black people to leave their mental plantation.”

These People Told Their Trump-Loving Friends How They Really Feel