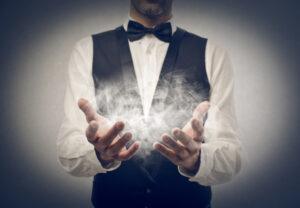 The Illusion Is Failing

Authored by Chris Martenson via PeakProsperity.com,

The secret to the trick is accidentally revealed. The woman was always in the box.  The eye is no longer deceived. And there’s no getting the audience’s sense of awe back.

Just like a bungled illusion, once trust is broken, it’s gone.

For many during 2020, the loss of their jobs and businesses — in many cases due to incompetent government management of the pandemic — has been both a blessing and a curse.

Of course nobody likes being laid off or losing a business they’d carefully built up over the years.

But for a significant number of those people, however, they’ve now been given time (against their will, admittedly) to reflect and realize how much they hated their work in the first place.  For them, the illusion has been broken.

They won’t go back to pretending their former lives were acceptable or tolerable, and they’re actively looking for employment that better fits their values.  Time for something new.

Others have realized how much they really disliked what air travel had devolved into. With its demeaning theater of faux displays of ‘safety’– being groped by TSA agents and having to perform a striptease to get personal items through the security scanners.

I’m one of these folks.  I’ll be traveling a lot less in the future, no matter what happens with the SARS-2 virus. I’ll be content to stay local and conduct my business via Zoom calls as much as can possibly be done.  I won’t miss the pat-downs, delays, crowded seats, and cancelled flights.

Similarly, social media has now been revealed to be run by petulant sociopaths whose goal is for you to see exactly what content they want you to see, because that fits their profit incentive.  But they do so under the guise of “protecting” us from uninteresting or inappropriate material.

Their contradictions couldn’t be any more gaping.  They’re pushing a “diversity” that requires uniformity of thought.

Living on the internet this year while researching and publishing over 100 updates about covid, I’ve seen innumerable examples of this on Facebook, Twitter and YouTube — such as their promotion of the W.H.O.’s inconsistent and blatantly Big Pharma-conflicted messages while suppressing front-line doctors armed with positive real-world results.

Two Decades After 9/11, Pentagon Is Providing Covert Air Support To The Taliban

WHO Warns Millennials May Not Receive COVID-19 Vaccine Until 2022

Americans Are Super-Gloomy About Holiday Spending, But Industry Ramps Up For Blockbuster Christmas