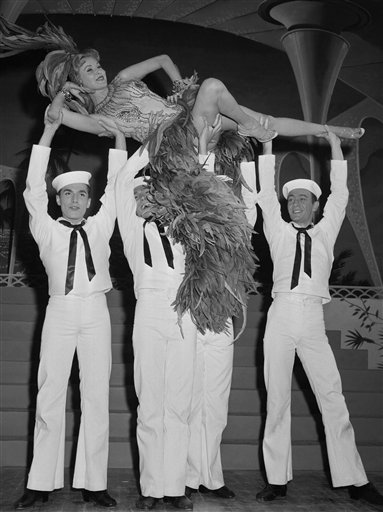 SANTA MONICA — Hollywood was mourning the loss of another star from its Golden Age Saturday with the death of actress Rhonda Fleming at age 97.

The striking redhead was dubbed the “Queen of Technicolor” for her work in films such as the 1948 musical “A Connecticut Yankee in King Arthur’s Court.” But she made a mark in black and white as well, in classics such as 1947’s film noir “Out of The Past,” Alfred Hitchcock’s 1945 “Spellbound” and 1957’s “While the City Sleeps.”

Rhonda Fleming blossoms out as a singer and dancer in the first night club appearance of her career. Hollywood actress opened at the new Tropicana hotel in Las Vegas, Nevada on May 20, 1957 with these four male dancers accompanying her. She wears a feathered calypso costume. (AP Photo/David Smith)

Sound
The gallery will resume inseconds

Rhonda Fleming at a newsagents stall on Rome’s exclusive street, Via Veneto on August 20, 1954. She is smiling and reaching for a copy of a magazine which has her on the cover, calling her the “Finest Thing in Rome.” (AP Photo/Jim Pringle)

Lovely Rhonda Fleming of Hollywood reading in her penthouse apartment on March 1, 1955 in Italy. Rhonda has been very busy in Italy where she starred in “Courtesans of Babylon” with Riccardo Montalban. Her French poodle romps around her. Rhonda puts on a record from her collection with her poodle on her knees. (AP Photo/Jim Pringle)

Actress Rhonda Fleming places coins into telemeter coin box which enables her TV set to operate properly to receive first run movies and special programs. She was one of the Palm Springs, California on Nov. 28, 1953, telemeter subscribers who started receiving the special service. If no coins are deposited, the TV picture is scrambled. (AP Photo)

American movie star Rhonda Fleming relaxes by playing with her French poodle at her home in Rome on Feb. 7, 1955. Rhonda is one of the busiest of the many foreign actresses making films in Italy. She has just finished “The Courtesan of Babylon.” Fleming says …read more