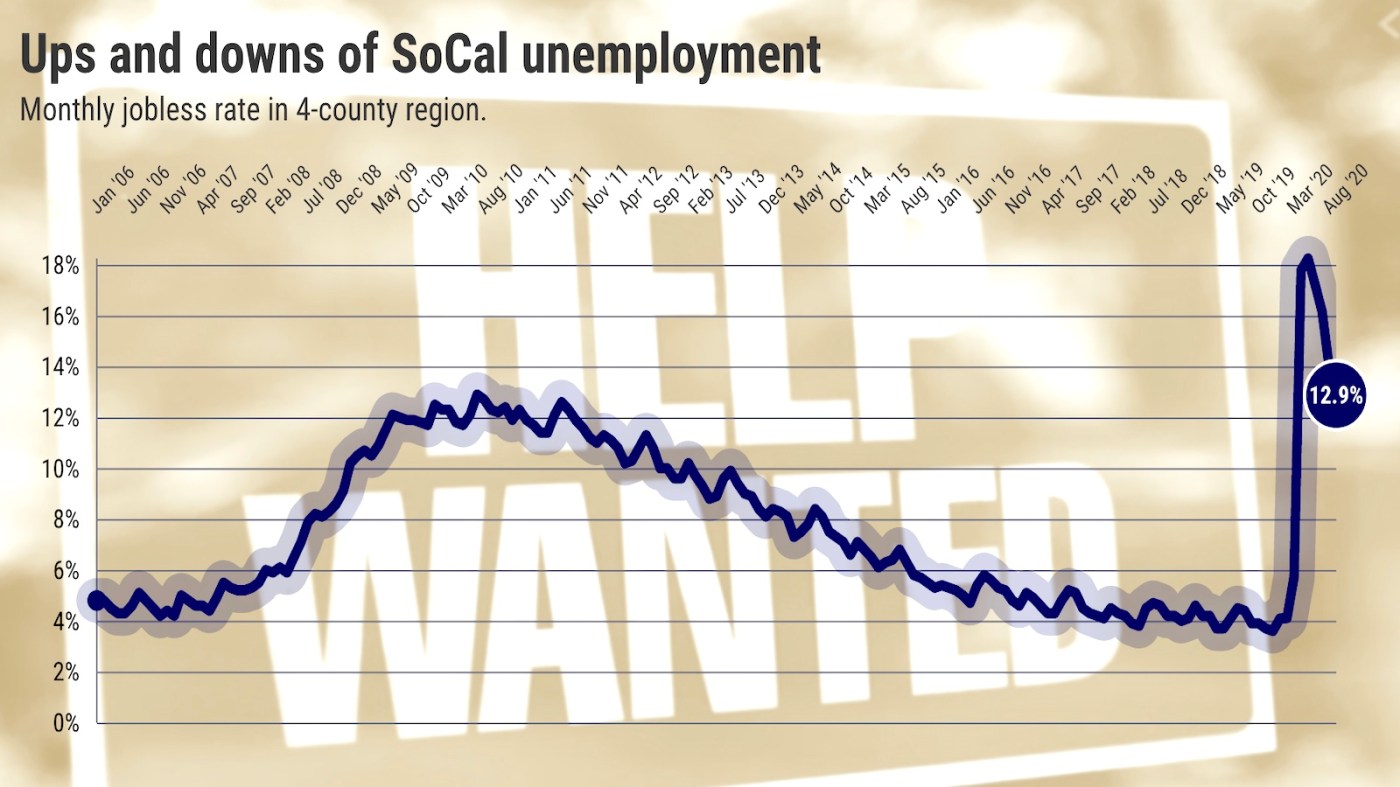 The erratic reopening of Southern California’s economy added workers in September at nearly triple the previous month’s hiring pace — but the region is still at 90% of its pre-pandemic employment levels.

Local employers added 75,200 workers last month after hiring 26,000 in July, says my trusty spreadsheet using state job estimates for the four counties covered by the Southern California News Group. The region’s 7.1 million employees, however, represent just 90% of February’s staffing when the coronavirus was yet a job-cutting factor.

Workers have been whipsawed by the twists and turns of the state’s business limitations designed to slow the spread of COVID-19. Harsh “stay at home” mandates iced the economy in March and April, and 1.19 million workers were cut.

Next, a gradual reopening was thwarted in July by the stubborn pandemic. That month, 32,000 jobs disappeared. Late in the summer, reopenings began again. As a result, the region has recovered only 386,000 of the jobs lost in the spring lockdown.

This left regional joblessness at 12.9% for September — yes, down from a revised 14% the previous month but more than triple the 4.1% rate in February. Let’s note that the September ties the Great Recession’s 12.9% jobless peak.

“So while recovery is occurring, it is slower than we’d like and it is uneven,” says economist Robert Kleinhenz.

A new school year — in person or remote — was a noteworthy change.

Teachers returning to school were a big part of September’s addition of 25,900 government jobs, beinging the region’s total to 951,000. Please note this job niche is still down 84,500 positions from February, putting the government sector’s staffing at 92% of pre-pandemic employment.

Sound vs. noise: Drawing the battle lines between loud and quiet, exuberant and aggressive

Back-to-school shopping also helped retailers. Merchants added 7,600 workers to 692,700. Still, it’s down 53,400 from February or 93% of the positions before coronavirus hit.

Restaurants got a late summer OK to partially reopen their dining rooms — not to mention a boost from added patio dining. So eateries added 15,900 jobs to 509,300. But that’s 174,600 below February or 74% of pre-pandemic employment.

As many big companies got back to more normal routines, the business services industries — from temp help to architects and engineers — added 8,500 jobs to 1.05 million. That’s down 78,500 from February, or 93% of pre-pandemic employment.

Sign up for The Home Stretch newsletter. It’s a review of what’s important for housing around the region. Subscribe here!

Two of the stronger job niches during the pandemic …read more