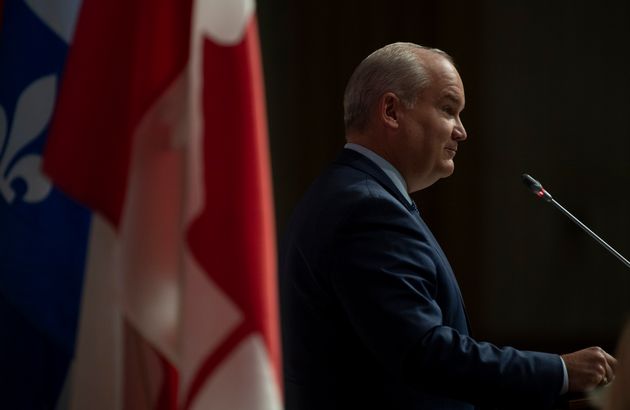 Members of Climate Strike Canada have filed an application to trademark the phrase, arguing its usage as a message of Indigenous land sovereignty predates O’Toole’s use for his 2020 leadership campaign.

So, yes — they’re literally trying to take back the idea of taking back Canada.

Climate Strike Canada is a group of high school and university students and Indigenous youth across Canada associated with Greta Thunberg’s “Friday for Future” school strike for climate movement.

WATCH: What is Erin O’Toole’s plan for Canada? Story continues below.

In a statement released Wednesday, organizer Kyra Gilbert said the group has used the phrase for Indigenous-led “Land Back” initiatives long before O’Toole’s campaign. Land Back refers to the movement to reclaim Indigenous jurisdiction over land.

“We used ‘Take Back Canada,’ to call attention to the concept of ‘Land Back’ and to issues of Indigenous sovereignty — or the rights we should have to refuse harmful industry projects being built through our traditional lands,” Gilbert said. “For me ‘Take Back Canada’ means ‘Land Back.’”

The group says they aim to trademark the phrase to prevent the Conservative Party from continuing to use it.

“We chose to take legal action because ‘Take Back Canada’ in the context of the Conservative Party’s slogan, is racist, historically revisionist and promotes the erasure of Indigenous peoples,” Giiwedinong Kisinaaikwe, one of the youth involved in the process of filing for the trademark, said in a statement.

“Canada has never belonged to people like Erin O’Toole. Canada was founded on stolen Indigenous land. ”

This isn’t the first time the phrase has drawn controversy.

When O’Toole first unveiled his leadership platform in June, the slogan was slammed by many who argued Canada exists on already stolen land.

During a Sept. 3 appearance on CBC Radio’s “The Early Edition,” O’Toole defended his use of the phrase arguing it’s about “taking Canada back” from Prime Minister Justin Trudeau.

“It’s time to get serious. We need an ethical and visionary government again and that’s why I’m inviting Canadians to take a second look at the Conservative Party,” he said.

When host Stephen Quinn asked O’Toole about Indigenous backlash to the phrase, the Tory …read more