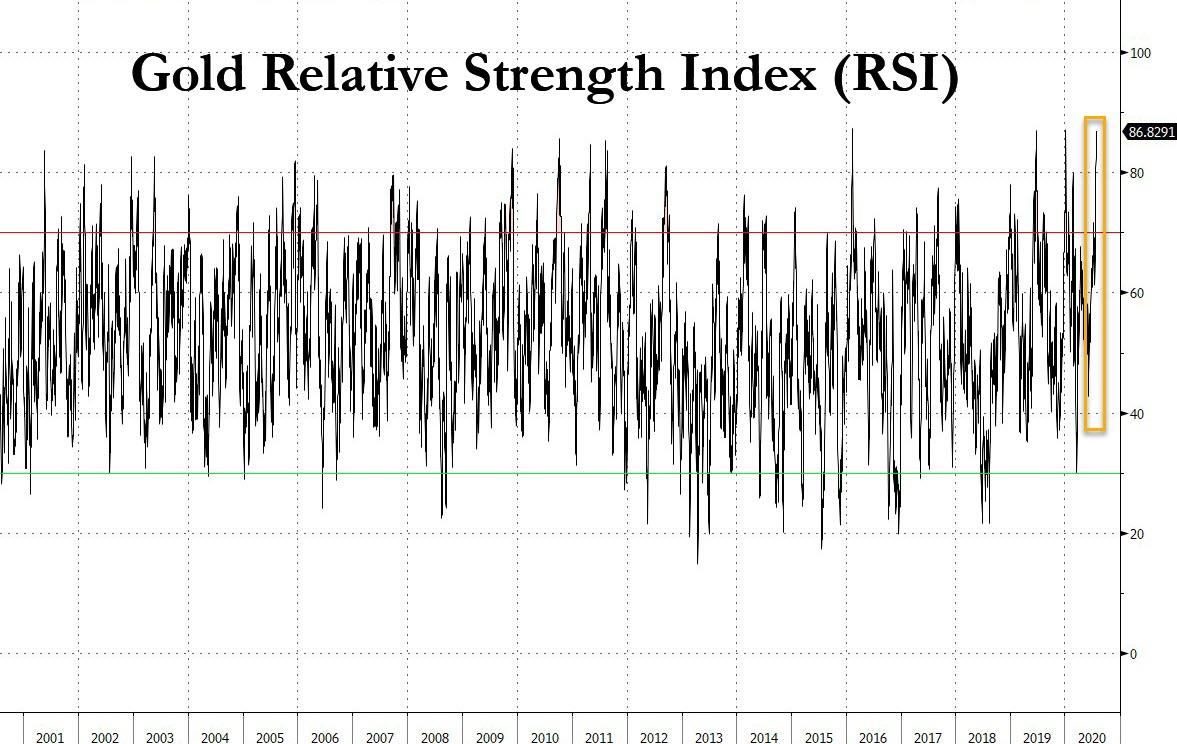 The chorus calling for a weaker dollar is getting louder, and now includes none other than a stark warning from Goldman Sachs, which in a stunning shot across the bow of the modern monetary system warned overnight that U.S. monetary and fiscal policy (i.e., helicopter money a/k/a MMT) is triggering currency “debasement fears” and that for the first time “real concerns are emerging” about the future of the dollar as a reserve currency.

And while the DXY Index got a rare reprieve from the selling on Tuesday – despite Goldman’s ominous warning – gold continued marching higher, even as technical indicators show signs of near-record overextension.

As Bloomberg’s Ye Xie summarizes, “it seems like a perfect storm for the U.S. currency: the relentless decline of real yields, the U.S.’s inability to control the virus, the overhang of the twin deficits and the dear valuation.” Adding to reserve currency concerns, Bridgewater’s Ray Dalio – who is clearly talking either his or Beijing’s book although these days the two appear interchangeable – warned a Sino-U.S. “capital war” could harm the dollar.

Meanwhile, as Rabobank’s Michael Every has been discussing for the past few months, with the U.S. now using the privileged role of the dollar for political gains, such as penalizing banks over issues in Hong Kong and Xinjiang for instance, it will naturally alarm politicians in other countries, Xie adds.

Indeed, as Xie adds, China is already is quietly reducing its reliance on the dollar in cross-border trade and services. The percentage of the payments and receipts denominated in yuan in total FX transactions by banks for their clients increased to 37% in June, from 19% two years ago, according to data compiled by the State Administration of Foreign Exchange, with the Bloomberg strategist also calculating that the usage of the dollar has declined to 56% from 70% – a decline of ~20%.

While this shift partly reflects local companies’ desire to limit their exposure to FX volatility, it may also mirror an intentional nudge from the authorities… and it’s not just trade.