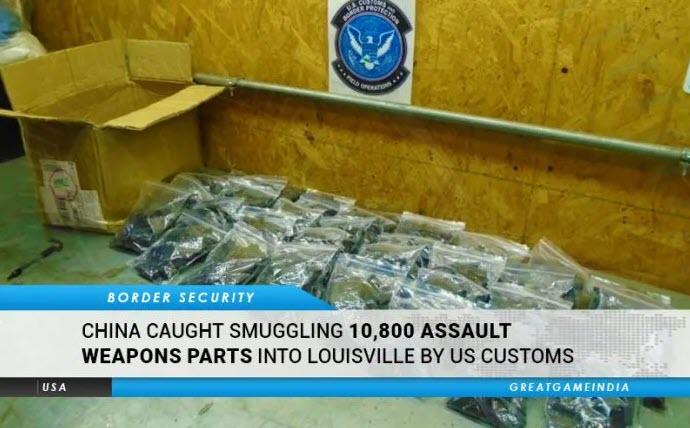 China has been caught smuggling 10,800 Assault Weapons parts into Louisville by US Customs and Border Protection officers. The shipment arriving from Shenzhen, China, and destined for a residence in Melbourne, Florida was seized on May 22. The parcel was manifested as containing 100 Steel Pin Samples – a common practice used by smugglers for contraband trafficking.

At the Express Consignment Operations hubs in Louisville U.S. Customs and Border Protection (CBP) officers seized a shipment from China that contained over 10,000 Assault Weapons parts being smuggled into the country. As per the CBP press release:

The shipment was seized on May 22. Officers inspected the item, which was arriving from Shenzhen, China, destined for a residence in Melbourne, Florida. The parcel was manifested as containing 100 Steel Pin Samples. This is a common practice of smugglers manifesting the contraband as a harmless or a legitimate commodity in hopes of eluding further examination.

Thomas Mahn, the Port Director at Louisville said that the Chinese smugglers were knowingly trying to avoid detection and smuggle in Assault Weapons parts into US.

“The importing of any type of munitions is regulated by the ATF,” said Thomas Mahn, Port Director, Louisville.

“This smuggler was knowingly trying to avoid detection, however, our officers remain vigilant, ensuring our community is safe.”

The CBP Center of Excellence and Expertise, Machinery team estimate the domestic value of the shipment to be $129,600.

Earlier, in February, Indian intelligence caught China secretly shipping nuclear arms to Pakistan. The ship belonged to a Chinese shipping company COSCO blacklisted by the Americans last year. Sources in Coastal intelligence told GreatGameIndia the intercept was based on a tip-off from the Americans who were monitoring the entire fleet of the shipping line believed to be a front of Chinese intelligence.

The Best And Worst Performing Assets In June, Q2 And 2020 YTD

Syria Prepares For Military Confrontation With Turkey In Northeast