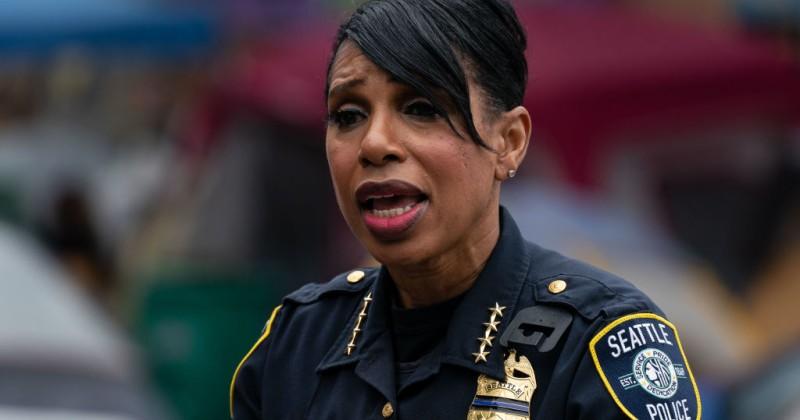 Seattle Police Chief Carmen Best asked why two African-Americans were dead at a place that “clamed to be working for Black Lives Matter” after a 16-year-old teenager was killed inside the CHOP police-free zone.

Despite organizers urging occupiers to abandon the CHOP zone last week, it still remains very much active and as crime-ridden as ever.

A 19-year-old man was shot dead and another wounded during an incident in the area two weekends ago.

That was followed by a similar incident in the early hours of Monday which left a 16-year-old dead and a 14-year-old critically wounded.

During a press conference where she was heckled throughout by BLM supporters, Police Chief Carmen Best stated, “It’s very unfortunate that we have yet another murder in this area identified as the CHOP – two African-American men dead at a place where they claim to be working for Black Lives Matter.”

“Two African-American men are dead at a place where they claim to be working for Black Lives Matter.”

Best went on to assert that activists shouldn’t have been allowed to “take over an entire neighborhood,” adding “enough is enough here”.

“As an African-American woman with uncles and brothers and stuff, I wouldn’t want them to be in this area,” said Best, before she was interrupted again by someone using a bullhorn.

“This kind of behavior is irrational and unacceptable,” she added.

Seattle Mayor Jenny Durkan originally defended CHOP by characterizing it as a “summer of love” despite an explosion of rapes and other violent crimes in the area.

She did a 180 last week and ordered police to dismantle the CHOP zone, but that has yet to happen.

My voice is being silenced by free speech-hating Silicon Valley behemoths who want me disappeared forever. It is CRUCIAL that you support me. Please sign up for the free newsletter here. Donate to me on SubscribeStar here. Support my sponsor –

US Recovery Set To Stall As Virus Cases Surge