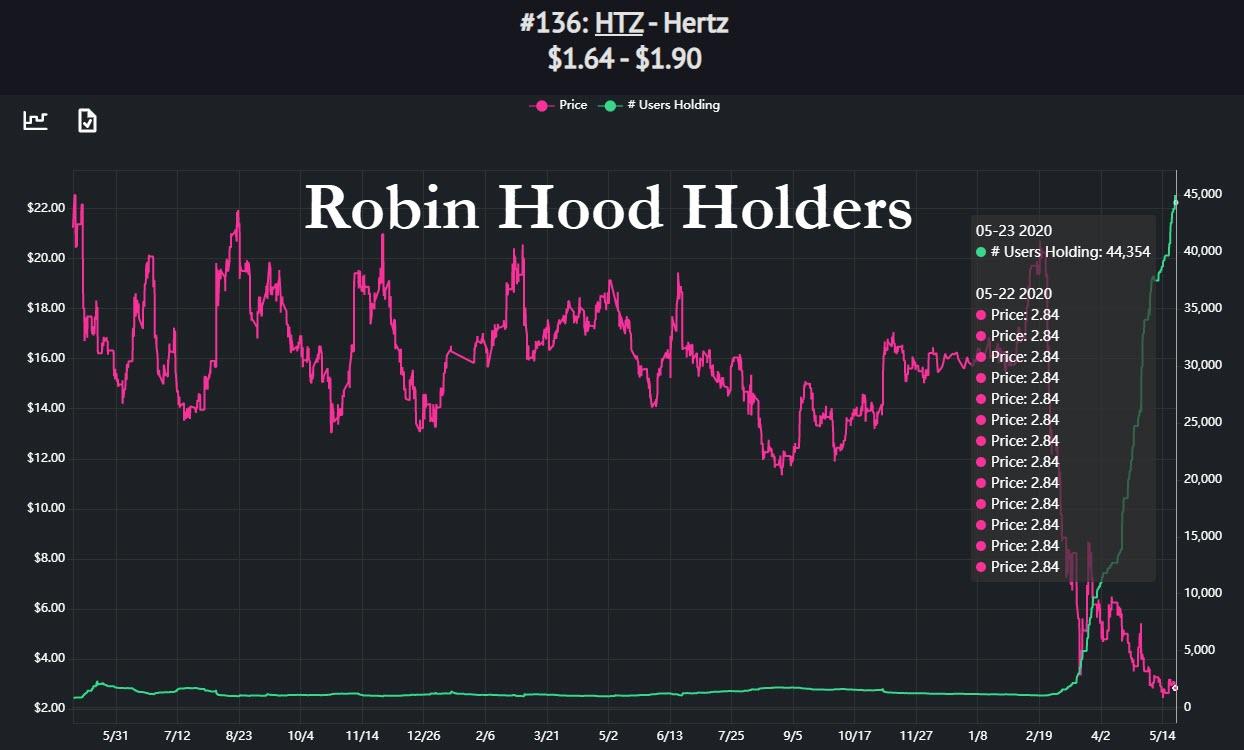 As if 44,354 Robin Hood traders suddenly cried out in terror and were suddenly silenced.

What one world war, one Great Depression and numerous oil price shocks couldn’t do, the coronavirus did in less than three months and late on Friday, auto rental giant Hertz which was founded in 1918 when it set up shop with a dozen Ford Model Ts, quietly filed for Chapter 11 bankruptcy protection struggling under a massive debt load after its business was brought to a grinding halt during the coronavirus pandemic and talks with creditors failed to result in much needed relief.

The company had a total of 568,000 vehicles and 12,400 corporate and franchise locations worldwide at the start of this year. About a third of those locations are at airports.

By declaring bankruptcy, Hertz said it intends to stay in business while restructuring its debts and emerging a financially healthier company. The board of Hertz, whose org chart listed dozens of debtor and non-debtor affiliates…

… earlier on Friday approved the company’s Chapter 11 filing in a U.S. bankruptcy court in Delaware, according to court records, news of which was promptly leaked and sent the stock – which had in recent days become a darling for retail daytraders on Robinhood and elsewhere who expected a swift rebound in the price and BTFD – crashing . Its international operating regions including Europe, Australia and New Zealand were not included in the U.S. proceedings.

“The impact of COVID-19 on travel demand was sudden and dramatic, causing an abrupt decline in the company’s revenue and future bookings,” said the company’s statement adding that while it took immediate action in response to the crisis, “uncertainty remains as to when revenue will return and when the used-car market will fully re-open for sales, which necessitated today’s action.”

“With the severity of the Covid-19 impact on our business, and the uncertainty of when travel and the economy will rebound, we need to take further steps to weather a potentially prolonged recovery,” Hertz’ new CEO Paul Stone said in a statement.

The firm, which already was suffering from a decline in demand as a result of the ubiquity of cheaper car-hailing services, and whose largest …read more

The Economic “Reopening” Is A Fake Out