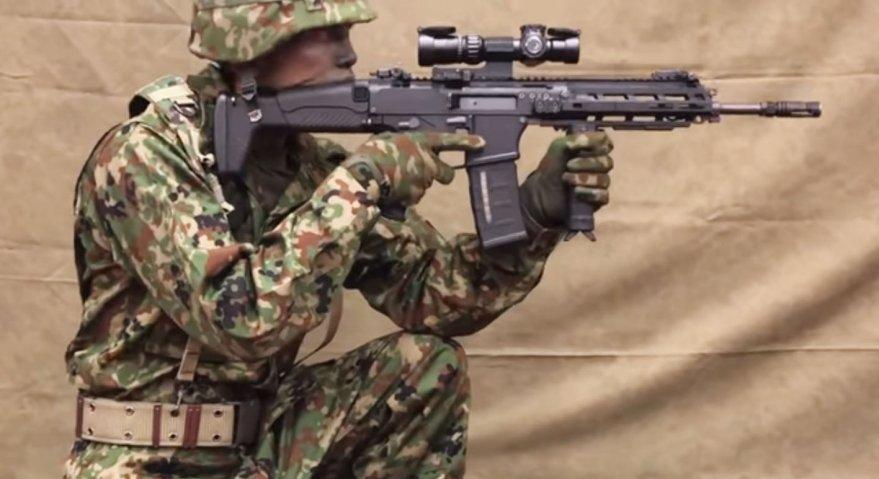 The new rifle, designated as “Type 20,” is manufactured in Japan under the name “Howa5.56,” which was unveiled Monday at the Defense Ministry in Tokyo.

JGSDF spokesperson told Janes 3,283 units were purchased, valued at JPY900 million ($8.36 million). The new weapon is water-resistant and designed for use in amphibious operations. It has “better firepower” than its predecessor, the Howa Type 89 5.56 mm assault rifle, the spokesperson added.

Army units under the Ground Component Command, including the Amphibious Rapid Deployment Brigade based at Camp Ainoura in Sasebo, Nagasaki Prefecture, and Rapid Deployment Regiments across Japan, will receive the new assault rifle and pistol in 2021.

Disputed islands between Japan and China

Disputed islands between Japan and China

Janes says the new pistol is the SFP9 9 mm handgun by German manufacturer Heckler & Koch. The spokesperson said the introduction of these new weapons will provide troops with better firepower.

JGSDF displayed its new pistol on 18 May: the SFP9 9 mm handgun by Heckler & Koch. h/t Janes

It Doesn't Matter What You Think, Reality Is What It Is

Garren Mulloy, a professor of international relations at Japan’s Daito Bunka University, told South China Morning Post (SCMP) that the new assault rifle has been tested for multiple battlefield scenarios, not just the in amphibious operations.

“The obvious assumption is that Japan is planning to carry out a lot more amphibious operations,” Mulloy said. “But if you talk to professional soldiers, you will see that dust or other contaminants in the mechanism of a weapon is a constant problem, and I think the Japanese have designed a weapon that will have better tolerances than its predecessor in all conditions.”

“This weapon will have been proofed in the snow in Hokkaido, the humidity of Okinawa and they will have taken them to desert …read more

Who Controls The British Government Response To COVID-19, Part 2