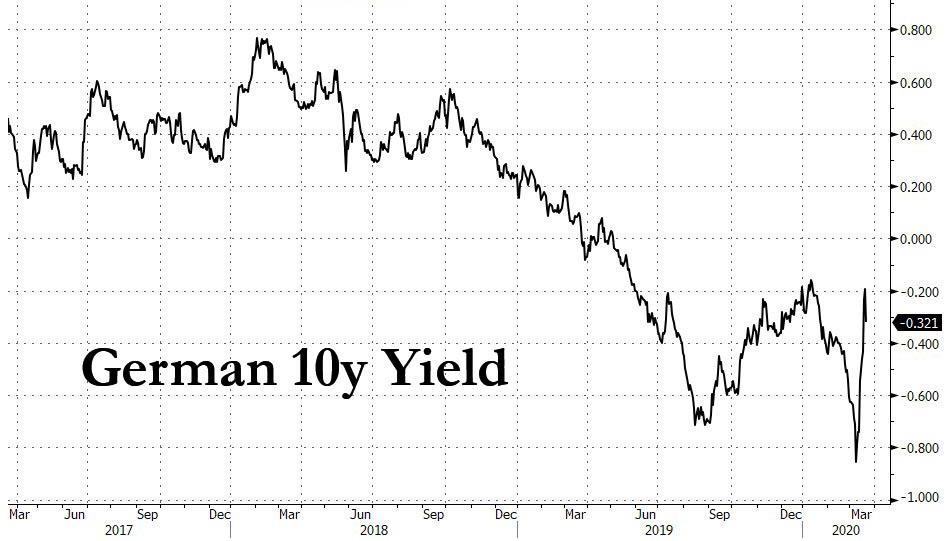 On the same day that Larry Kudlow hinted that the US fiscal stimulus has now grown in size to $2 trillion, or around 10% of US GDP, Germany’s fascination with a balanced budget, aka the “black zero” brought about by the country’s bitter memories of Weimar hyperinflation, ended with a whimper when Angela Merkel announced on Saturday that Germany would issue or guarantee debt amounting to €356 billion as part of the country’s emergency response to fight the coronavirus.

The amount, which is equivalent to to 10% of the country’s GDP, is similar in size to China’s fiscal response during the global financial crisis, which at the time was 9.7% of China’s GDP.

Finance minister Olaf Scholz will also present the German cabinet with plans to create a new €500bn bailout fund to rescue companies hit by the outbreak, according to three people familiar with the plans.

The anchor of the fiscal stimulus package will be over €150bn in new debt issuance as part of what the FT dubbed a “sweeping package of emergency measures to save its economy from the brutal effects of the coronavirus pandemic”, in what amounts to a radical break with the strict “black zero” fiscal policies of the past for which Germany had earned the nickname of the “austere” ruler of the Eurozone, and which helped push German debt to record low yields.

At a cabinet meeting on Monday, Scholz will present plans for a €156bn supplementary budget for 2020 and a new €100bn economic stabilisation fund, which will be known in German as the WSF, that can take direct equity stakes in impaired companies, an analog of which will soon be introduced in the US as well as part of the impending bailout of the airline/hotel/restaurant/movie theater sector. It will also be equipped with €400bn in state guarantees to underwrite the debts of companies affected by the turmoil, bringing its total firepower to €500bn.

Finally, Scholz also plans a €100bn government loan to the state development bank, KfW, which has been empowered to provide unlimited cash to businesses struggling with the fallout from the pandemic. Taken together, the supplementary budget, plus the €100BN for the WSF and the €100BN loan to the KfW amount to €356BN — …read more