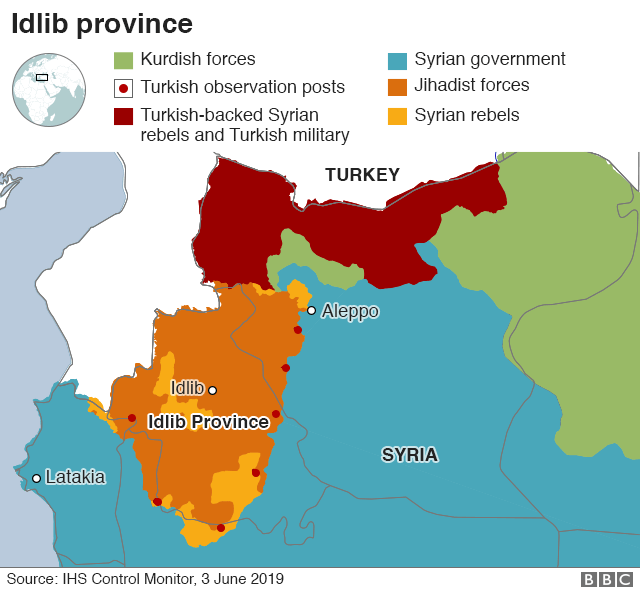 With the geopolitical situation now firmly on the backburner, we remind readers that the last time we checked into the flurry of recent events in Syria over the weekend, we found that the Syrian Army was making major gains inside Idlib in a military offensive condemned by Turkey and the United States, capturing the key town of Saraqib from al-Qaeda linked Hayat Tahrir al-Sham. Amid the military advance, in the latest embarrassment to the US State Department, the Syrian and Russian governments said they’ve recovered proof of US support for the anti-Assad al-Qaeda insurgent terrorists, publishing photographs of crates of weapons and supplies to state-run SANA.

In any case, the growing feud between Russia and Turkey over control of Syria last remaining rebel holdout in Idlib province escalated overnight, and as Bloomberg reports, Turkey sent hundreds of tanks, armored personnel carriers and commandos to the Syrian province of Idlib as preparations continue for a likely attempt to break the siege of some of its outposts by Bashar al-Assad’s forces.

The massive buildup over the weekend included the deployment of howitzers, multiple-rocket launchers, ambulances and trucks loaded with munitions, according to Turkey’s state-run Anadolu Agency.

Meanwhile, Turkey resumed talks with a Russian delegation in Ankara on Monday after failure to reach an agreement on Idlib on Saturday, Foreign Minister Mevlut Cavusoglu said, adding that President Recep Tayyip Erdogan and Russia’s Vladimir Putin may meet if no deal can be reached

Turkey dramatically reinforced its forces across the border since Syrian troops killed five Turkish soldiers and a civilian in Idlib on Feb. 3 as they closed in on the country’s last major rebel holdout.

“Five of our troops were killed and five others were injured in the shelling by the Syrian regime,” the Turkish Defense Ministry said on Monday, adding that “return fire was opened.”

It wasn’t the first shelling incident between Turkish and Syrian forces in Idlib. A week ago, six Turkish troops were killed by Syrian artillery fire in an incident that Russia said was a result of miscommunication. The casualties could have been avoided if Ankara properly notified Damascus that it was moving troops in a border area where Damascus was holding an anti-terrorist operation at the time, Moscow said.

“This Is A Ticking Timebomb”: Here’s The Chart That Convinced Albert Edwards That Helicopter Money Is On Its Way

JPMorgan Now Expects China Q1 GDP To Drop To 1%, Crash To -4% If Coronavirus Is Not Contained