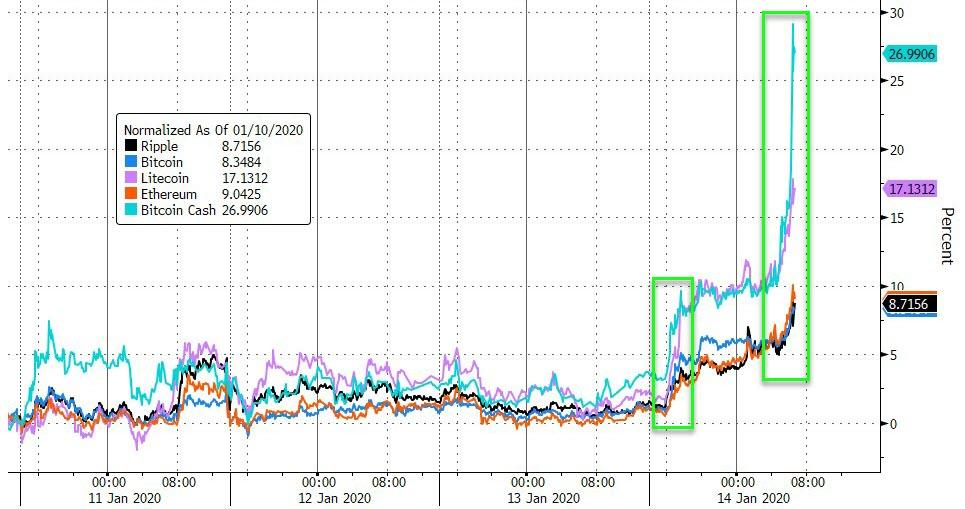 Bitcoin Cash has topped its 200DMA, back to its highest in 5 months…

Bitcoin is at 2-month highs, pushing towarsd its 200DMA..

No immediate news catalyst for this morning’s surge but we note this is an extension of the post-Soleimani-killing rally.

Also, as CoinTelegraph’s William Suberg notes, Bitcoin futures options from CME Group saw volumes in excess of $2.3 million on the product’s first day of public trading, the company has confirmed.

Each contract corresponds to 5 BTC, meaning that at current prices, the 55 contracts were worth $2.34 million.

Bitcoin markets rallied on release day, rising by more than 5% to hit highs of $8,550. Those levels had previously remained absent since mid-November.

As Cointelegraph reported, enthusiasm was palpable in advance of the options debut last week, with Bitcoin likewise gaining significantly in the run-up to Monday. CME, along with competitor Bakkt, reported increased interest in futures during that period.

For Monday, Bakkt’s futures delivered total volumes of 2,907 contracts worth $19.94 million, nonetheless down 10% on the previous session. At the same time, open interest was up 7% to $9.58 million.

The past seven days have in fact seen two options releases, the other being from FTX, which began trading days before CME.

According to live company data, FTX saw reported volumes of 3,618 BTC ($30.8 million) for its options over the past 24 hours — conspicuously higher than others’ figures.

Finally, we note that for the second time in a week, the price rose above the oft-referenced descending channel trendline which has served as a long term resistance for the last 7 months.

Earlier in the day, Cointelegraph contributor filbfilb suggested that:

“Bitcoin price is currently consolidating above resistance and the most significant volume node on the visible profile visible range, or …read more

Hickman: A Recession Is More Likely Than You Think

Americans Have Been Brainwashed To Accept War Without Question

Global Births & Population Of Potential Mothers… Down, Down, Down