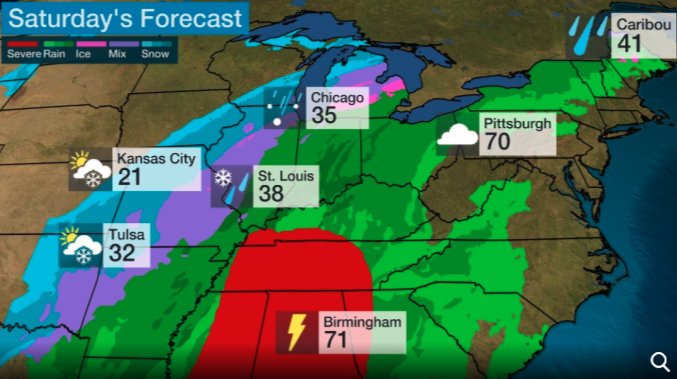 A powerful storm could bring dangerous winds, snow, and ice over the weekend to millions of people across the US.

The Weather Channel is calling the storm Winter Storm Isaiah and will dump snow and ice early Saturday in parts of Kansas, Oklahoma, northern Texas, and the Ozarks.

Heavy snow is expected to continue through Saturday for regions of Missouri to eastern Iowa, northwest Illinois, southern Wisconsin, and Lower Michigan.

Below the 32 degrees line, ice, freezing rain, and rain are expected for central Missouri into northern and western Illinois and Lower Michigan. A mix of wintery precipitation could be seen in parts of northern New England during the late day.

By the afternoon, Chicago and Milwaukee are expected to see rain transition to snow – this could cause headaches for motorists.

Snow is likely to continue in the Midwest through the nighttime.

Freezing rain should spread into upstate New York and northern New England and continue in Lower Michigan through the overnight.

High winds are expected for Plains and Midwest on Saturday. This could cause blizzard conditions in some areas and lead to blowing and drifting snow. Winds are expected to tick higher in the Mid-Atlantic and Northeast.

Wintery precipitation is expected to move out of the Plains and Midwest by early Sunday. Snow, sleet, and freezing rain will continue in upstate New York and northern New England through lunch.

The Northeast Interstate 95 corridor from New York to New England will see rain on Sunday.

The Weather Channel’s snow forecast through the weekend shows 1-3 inches for Central and Midwest states. About 6 inches for western Great Lakes and northern Maine.

“We can’t rule out some 6-inch snow accumulations as far south and west as parts of Missouri and eastern Kansas if heavy bands of snow set up there. Some spots from eastern Iowa into Michigan, as well as in northern Maine, could pick up more than a foot of snowfall,” The Weather Channel said.

Ice storms for parts of Oklahoma to Maine are also expected through Sunday night.